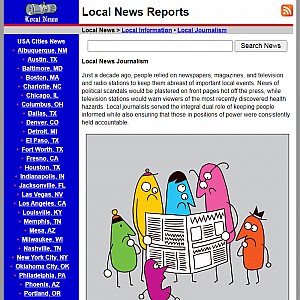 Until the turn of the millennium, people relied on newspapers, magazines, and television and radio stations to keep them abreast of important local events. Political scandal news would be plastered on front pages hot off the press, while television stations would warn viewers of recently discovered health hazards. Local journalists served a dual role of keeping people informed while ensuring that persons in powerful positions were consistently held accountable. This Local News website reviews the role of local journalism and local news reporters in the modern news media industry. The illustrated website includes news and information about major US cities, in the form of headlines and article titles as well as news summaries and article references.